Well yesterday I took the Ruger Model 77 Hawkeye chambered in . 338 Federal to the range again, and I have to say the more I shoot it the more I like this cartridge.... I like so much that I have scraped my idea for a similar wildcat that I called the .325 V Tac. The .338 Federal is pleasant to shoot, and really packs a nice punch when it hits... the penetration is excellent for such a small cartridge even with the cheaper bullets.

On this trip I took some factory ammunition to try for a comparison to what I have been handloading here at Venom. I had Federal's American Eagle # AE338F factory load.. that is topped with a 185 grain SP bullet that has a Ballistic Coefficient of .378; factory stated 2,750 fps velocity... and 3106 ft. lbs of energy. My Chrony showed similar stats for the cartridge.. so similar I see no reason to list all of the readings here in this blog post. The only aspect that I see where the cartridge is lacking compared to the handloads I have been doing is the bullet... I have been using Hornady, and Barnes premium bullets that perform much better on impact. Weight retention with this load was not the best, but considering this is the bargain load from Federal it is an all around load that is worth what they charge for it....I would prefer a better bullet for hunting purposes. I am thinking that this is going to be the big difference in the Federal ammunition. Simply the more you pay the better bullet construction you are going to get, and such will give you better performance in the field.

Accuracy with this factory load was good.... I hope to have targets to show each load performance when I update the article on www.venomcartridgecompany.com  More as I go with this rifle. 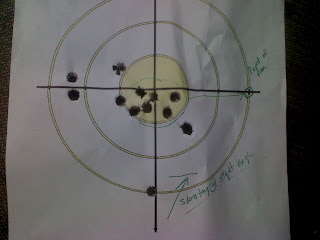 Posted by Venom Cartridge at 11:39 AM Venom Cartridge
Hazard, Kentucky, United States
Venom Cartridge LLC is a company that is not only an ammunition manufacturer, but we also are a firearms dealer.....we don't just stick to the norm!! We do custom work of all kinds. Custom ammunition specializing in new custom wildcat cartridges, as well as improved designs that can breath new life into your favorite firearm. Custom one of a kind firearms personalized to your specifications, or allow us to design a firearm that is a unique one of a kind weapon. We offer ideas for hunters/shooters that have often dreamed of a new way of doing things, firearms enthusiasts that don't settle for the average, shooters that want all the bite that a Venom design can give them..... Please visit our services/products page for a full list of what we offer.